Here’s an idea I had today that I wanted to get down so I don’t forget it…autonomous self-checkout with cell phones. Here’s the idea:

You write a web-service that logs the customer into their account from their cell phone browser, and then takes over the camera on their cell. They point the camera at a bar code on the book in question, and you software looks it up in the catalog and checks it out to the patron.

The difficult part for the library is how to enable the deactivation of the security strips that most of us use…ideally, the security system would be tied to the catalog, and would know when a book was checked out and when it wasn’t, and alarm only as appropriate.

This would take library staff completely out of the checkout process (which self-checkout already does) but would ALSO take any specialized equipment out, and allow for nearly complete patron autonomy in the stacks.

The interesting thing is, I’m pretty sure that all of this is possible with current open source software. Certainly there would need to be some development, but I don’t think anything would have to be completely written from scratch…maybe connectors that transfer data from one system to the other.

Thoughts? Is this being done anywhere? Or did I actually have an original thought?

I’ve kept up with the recent Orson Scott Card controversy in libraryland, and I respect nearly everyone who has taken a strong stance against the decision by the YALSA to award OSC the Margaret A. Edwards award for adolescent literature for 2008.

I’m not sold on the controversy here.

There is no denying that OSC is a homophobe…no, that’s probably not strong enough. “Fear of homosexuality” doesn’t approach his views. OSC is a heterosexist bigot, based on his own words, and does not deserve either our respect or our patience. But the two works that are being honored, Ender’s Game and Ender’s Shadow, are not homophobic. They don’t seem to speak with the same voice as OSC in interviews. They portray strong, smart kids doing incredible things, and should stand above and beyond the idiocies of the author.

The award is given, according to the description online, in order to:

…recognizes an author’s work in helping adolescents become aware of themselves and addressing questions about their role and importance in relationships, society, and in the world.

The works do just that.

The author can be an idiot…hell, it could probably be argued that most artists of any sort are damaged in some significant way. Insanity, adultery, substance abuse, and yes, crazy beliefs…all crop up in the pantheon of artists. Just because the author is nuts doesn’t mean that the work is nuts.

Would I give OSC an award? No. Would I honor the work? Yes, I would. It’s a fine line, but otherwise I find myself having to question every piece of art by examination of the artist. Eliza now officially has a library! Thanks to the generosity of my good friend Tim, Eliza is now a proud Lifetime member of LibraryThing! So if anyone out there has thoughts of getting her books in the future, now we have a way to double check to see if she owns it…and boy, is she going to own some books.

“The vision is that you should be able to get any book”not just any book in print, but any book that’s ever been in print”on this device in less than a minute.” –Jeff Bezos 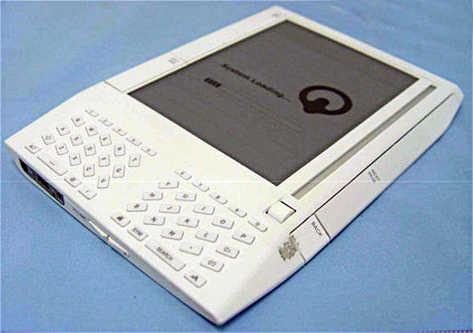 How’s that for a librarian’s dream? The Kindle, Amazon.com’s new eReader, launches tomorrow, and Newsweek has an article online about the new, possibly revolutionary, product.

I can’t do a complete thinkpiece on the Kindle right now, but over the course of the week I’ll get to my take on the device. There are still lots of questions unanswered (the wireless connectivity charge, for one), but here’s the quick take to be expanded on later:

If you haven’t seen the news, KGS had a piece published in Nerve this week. After reading it, then re-reading it, then going back to examine the use of language…well, I’m blown away.

I knew that she was a good writer. I mean, you don’t have to read Free Range Librarian long to know that, not to mention all the other pieces she’s written over the years (and no, that’s not an age joke, kgs). But this one really was different in a substantial way than the things I’ve read from her before.

It was personal. The enormous amount of effort this must have taken…seriously, just read this:

My heart thumps. I slowly accept the gun with my left hand, watching through the corner of my eyes so I know the shopgirl is observing how nicely, how safely, how carefully I handle the pistol, always pointing it down and away. This delicacy, this attention to detail, this awareness that I must Never Point At Anything I Don’t Plan to Shoot: in my shyness, this is the closest I can get to flirting, an activity I should not be engaged in anyway â€” except that as long as I am in a gun shop, an activity which I know would earn me a severe scolding from my beloved, I might as well be naughty all around.

This is writing that is alive, full of verve and vibrance and it’s in your head and your heart all at once. Whenever someone asks me who my favorite authors are, my stock answer is “anyone who makes me want to write.” And that’s true…all my favorite authors use language that make me think “Goddamnit man, why are you not doing that?” Truly great writing make me want to carve words out of the future, using them as weapons, as blankets, as nourishment.

This essay made me want to write.

Well, now that both contracts are signed, I can talk a bit about my next two writing projects.

First up, I’ve agreed to write an article for Library Journal. The topic? A new reference/instruction project here at UTC involving podcasts and iPod rentals. We’ve got grand plans that we hope to put into practice over the course of 2007 that involve video and audio production and leverage our new website (just launched today!). We’re looking for integration and experimentation from our reference/instruction team, and I have faith they’ll come up with uses that I can’t now imagine. But for LJ, I’m going to write up the entire planning process, from grant writing to how we’ll handle the various challenges involved in a project of this scope.

Second…I’m currently under contract to write a book for Linworth Publishing, tentatively titled Biblioblogging (almost certainly that will change), along with my partner in crime Karen Coombs. I plan on blogging portions of the work, research, and process involved in this writing as well.

These two things, along with the new job…well, let’s just say that 2007 is promising to be interesting if nothing else.

Cory Doctorow has an amazing essay in Forbes, called Giving It Away. Concerned with how giving away electronic copies of books drives sales of printed copies, it’s a clear and amazing set of thoughts on the current publishing world.

I’m particularly caught up in publishing issues right now, given that I’m negotiating with a publisher for publication of a book. I wonder if I sent them a copy of this essay it could possibly make a difference….

The thing about an e-book is that it’s a social object. It wants to be copied from friend to friend, beamed from a Palm device, pasted into a mailing list. It begs to be converted to witty signatures at the bottom of e-mails. It is so fluid and intangible that it can spread itself over your whole life. Nothing sells books like a personal recommendation–when I worked in a bookstore, the sweetest words we could hear were “My friend suggested I pick up….” The friend had made the sale for us, we just had to consummate it. In an age of online friendship, e-books trump dead trees for word of mouth.

Because I’ve let a friend talk me into trying National Novel Writing Month. What’s that, you say? In the month of November, a few thousand people will agree to attempt to write an entire novel solely between Nov 1 and Nov 30. For those keeping score, that’s 50,000 words in 30 days.

I’m going to try it anyway. Want to join me?

Check out the new search from OCLC…Worldcat gets Googlized, and the results are pretty good. I absolutely adore the “refine your search” options that it gives you on the left bar…Now can we finally get rid of our local catalogs? Pretty Please?