Yahoo recently launched a new beta service, mash.yahoo.com, which seems to be their attempt to enter the social networking fray. 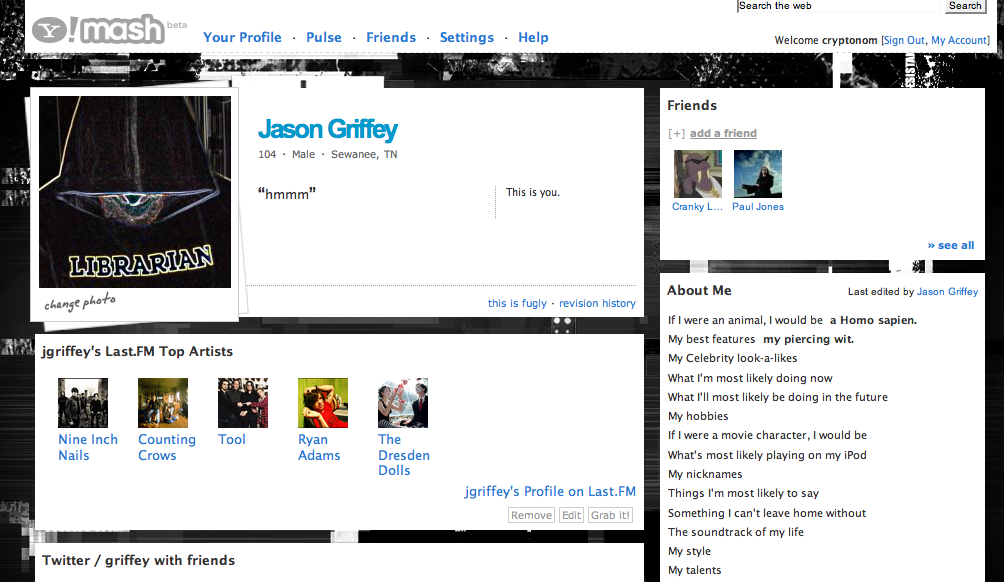 Similar in style to iGoogle, you have blocks of content (modules) that are available to add to your page. These act as you expect AJAX sorts of pages to work: you can drag and drop them around your two-column layout. To customize your page you can also add a background image (similar to Twitter) and manage the colors of your modules (background, border, text). All the expected modules are around: Flickr, Twitter, a generic RSS module.

Here’s where it gets weird. Your friends, by default, can edit your page…move modules around, etc. They can also affect it in other ways…one of the default modules is a “pet” (represented by a line drawing) that you can interact with…feed, pet, etc. You can also lick, smack, kill, and snorgle it. And you can do so to other people’s as well.

In the end, this ends up being a sort of aggregator for your virtual life, but others have tried that (correlate.us) and failed to gather speed online. The addition of a social networking component to that is interesting, but I’m not sure whats gained other than the potential strength of viral growth from spread from friend-to-friend.

It’s interesting to see what Yahoo is doing here, trying to leverage their way into the social networking world. They own two of the most popular (and most original) social sites on the ‘net…del.icio.us and flickr. I would expect them to do more cross-pollination, but at the same time I hope they don’t. Del.icio.us and flickr are two of my favorite things online, and I don’t want to see them change too much. I’m already frightened by the upcoming delicious 2.0.

If anyone wants an invite, leave your email in the comments.

One reply on “Yahoo Mash”

First, thanks for inviting me to the fray. I dig it a bit and agree with you on all your concerns. The one thing I don’t like about it (other than you’re forray into making my crap pink … thank you very much) is there’s no blog function just for Mash. I thought it might be a neat place to just file my personal musings since my blog is more professionally geared (more solutions on that coming, of course). Feeding my RSS to Mash is nice (though I couldn’t get it to work) but Let me leave more than just Twitter-esque entires for folks to see.

If I missed a widget that does this, let me know. I’m looking forward to continuing the tinker, though.